Representatives from museums and the cultural sector hailing from across the Euregio Meuse-Rhine gathered at Groote Societeit in Maastricht on 25 November 2019. They were attending the Terra Mosana Symposium, hosted by MACCH and the Institute for Transnational and Euregional cross-border cooperation and Mobility (ITEM), where the feasibility of an Euregional CultureCard was being discussed. The CultureCard aims to encourage cross-border museum visits and cross-border cultural collaborations.

The Euregional CultureCard initiative is part of the Interreg Terra Mosana project. Terra Mosana, coordinated by the University of Liège, is a collaboration between municipalities, heritage sites, cultural institutions, universities and residents in the Euregio Meuse-Rhine, with the aim of boosting cross-border tourism, as well as promoting a sense of EMR identity through the digital exploitation of its own unique cultural heritage. Together with the Terra Mosana partners, two interdisciplinary research centres of Maastricht University, MACCH and ITEM, have joined forces in conducting a feasibility study towards a Euregional CultureCard.

A panel discussion was held with representatives from the above-named museum card initiatives and complemented by Michael Dejozé (Managing Director at the EGTC Euregio Meuse-Rhine), Lene te Haar (Cultural Ambassador for the Dutch Consulate General in Düsseldorf), Vivian van Saaze (Director of MACCH and work package leader for Terra Mosana), and Prisca Niël (Head of Communication and Marketing at Schunck in Heerlen).

Discussions during the panel session covered topics such as successful business models, potential Interreg funding, as well as the benefits for cultural organisations to gain more insight into their audiences by means of business intelligence through data analytics.

The Terra Mosana project is being executed within the context of Interreg V-A Euregion Meuse-Rhine and is financed by the European Regional Development Fund, the Walloon Region, the Provinces of Limburg (in both the Netherlands and Belgium) and the State of North Rhine-Westphalia. 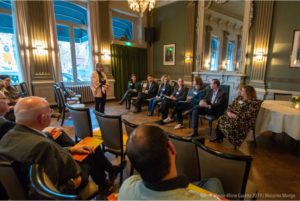